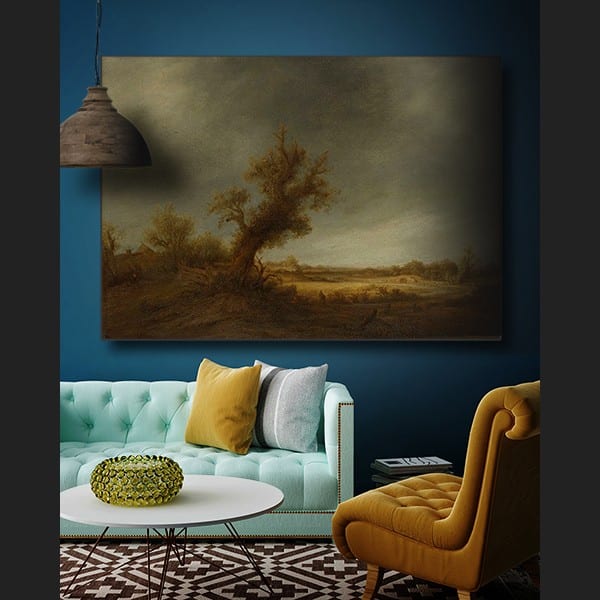 The life of Adriaen van Ostade

Adriaen was born as the eldest son in Haarlem on 10 December 1610 and baptised on 19-12-1610. His father Jan Hendricx was originally from Ostade near Eindhoven. Adriaen and his brother Isaack, who later also started painting, adopted the name Van Ostade as their surname.

Adriaen has been married twice, both wives died prematurely.

He was apprenticed to Frans Hals and in 1634 became a member of the St Luke's Guild. During his life, he was already a very wealthy man. Adriaen died on 28 April 1685 in his home town of Haarlem.

The work of Adriaen van Ostade

Adriaen's work belongs to the Dutch School and can be divided into three periods.

In the 1st period, he painted peasants and villagers. These paintings were often a cheerful caricature of these people. Adriaen played with light and dark.

The second period, around 1640, he still painted peasants and villagers, but his work became calmer and warmer and he no longer painted caricatures. Adriaen was influenced by Rembrandt. Adriaen then also painted landscapes, but that was not really his passion.

His work consisted not only of paintings but also of drawings and engravings. The latter he did mainly towards the end of his life, the 3rd period.

His brother Isaack and Jan Steen were also apprenticed to Adriaen.

A masterpiece by Adriaen van Ostade on your wall?

Do you want one of Adriaen van Ostade's masterpieces on your wall? Take a look at his paintings and choose your favourite in the desired size.