Read about the life and work of Aelbert Cuyp - Muurmeesters 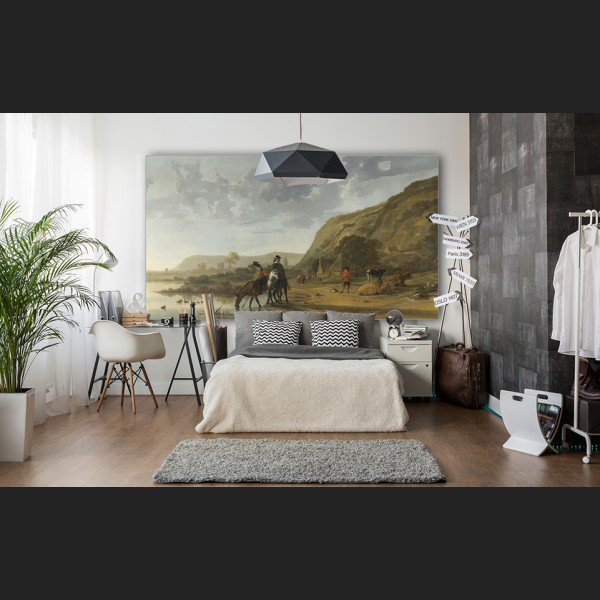 The life of Aelbert Cuyp

Aelbert was born on 20 October 1620 in Dordrecht and was the son of Jacob Cuyp, a landscape painter. His father taught him the art of painting. Aelbert was not only a painter but also a draughtsman and printmaker.

In 1658 Aelbert married the widow Cornelia Bosschman; she already had three children and together they had another daughter.

After 1660, Aelbert received various positions in the reformed church and his financial situation improved so much that he stopped painting. He belonged then to the well-to-do.

Aelbert Cuyp died on 15 November 1691 and was buried in the Augustijnenkerk in Dordrecht.

The work of Aelbert Cuyp

Because his father taught him the trade, it was not surprising that Aelbert also got his love for animals and landscapes. After 1650, Aelbert got his own style. While he had never been to Italy, he developed a sunny Mediterranean atmosphere with river views often depicting ordinary people with horsemen in the foreground. Although not to Italy, he made two study trips. The first trip was in 1642 to Rhenen, Arnhem, Amersfoort, Utrecht, Leiden and The Hague. The second trip was in 1652 to Arnhem, Nijmegen, Elten, Emmerik, Kleve and Kalkar.

In the 18th century, Aelbert Cuyp's work became known in England and he became a hype there. Many of his works hang in England.

A masterpiece by Aelbert Cuyp on your wall?

Do you want one of Aelbert Cuyp's masterpieces on your wall? Take a look at his paintings and choose your favourite in the desired size.