Read about the life and work of Andreas Schelfhout - Muurmeesters 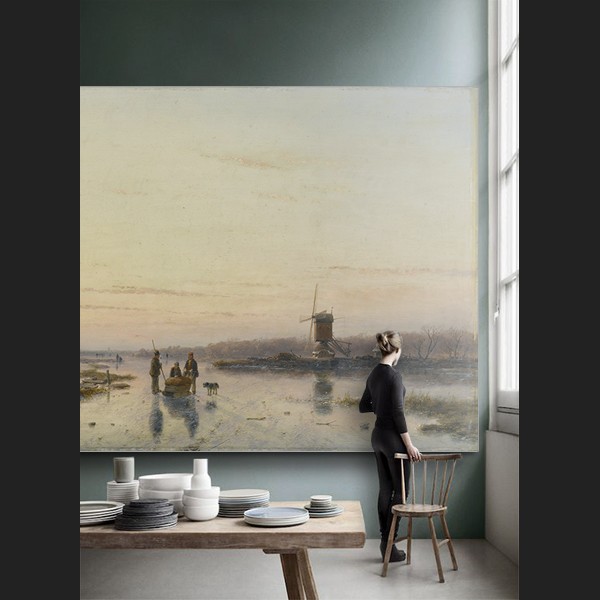 The life of Andreas Schelfhout

Andreas Schelfhout was born on 16 February 1787 in The Hague. He is the son of Jean-Baptiste Schelfaut and Cornelia Catharina van Hove. His father was a frame-maker and gildsman from Ghent who settled permanently in The Hague in 1788. Andreas started working with his father as a facade painter.

Andreas painted in his spare time. His parents saw that he had talent and in 1808 apprenticed him to Johannes Breckenheijmer. Johannes Breckenheijmer was a stage decorator at The Hague's theatre. Here Andreas learned not only perspective and paint preparation, but also how to paint landscapes/street scenes. His masterpieces are so good that other artists call them "the Schelfhouts".

In 1807 Andreas married Cornelia Gevers (1782-1838) and together they got 4 daughters. During Cornelia's sickbed Andreas met Martina Maria Wielik, 14 years younger, with whom he had 2 sons before marrying in 1839. After that they had 2 more sons. They lived on Zuidwal in The Hague, and later Andreas had a house built on Koninginnegracht 6 in The Hague.

Andreas died on 19 April 1870. He was buried at the Oud Eik en Duinen cemetery in The Hague.

The work of Adreas Schelfhout

In 1811 Andreas participated in an exhibition with three paintings. He received a lot of attention and was encouraged to sketch more in the open air. Andreas kept these sketches in his book Liber Veritatis (the book of truth). This book contains many of his sketches that were later painted as paintings.

In 1815 Andreas Schelfhout opens his own studio and attends more exhibitions. First only in The Hague, but later also in Flanders. In 1819 Andreas wins a gold medal in Antwerp. Andreas became a direct member of the Royal Academy of Fine Arts when it was founded in 1818.

After four years Andreas became a 4th class correspondent and went from exhibition to exhibition. Among others, the exhibition of 'Living Masters' in The Hague and Amsterdam.

Andreas also travelled abroad. Between 1825 and 1835 to France, Germany and England. After Andreas returned from these trips, his works became warmer and more varied. Andreas was a romantic painter and a forerunner of the Hague School. His works were bought by private collectors but also by the Royal Family. Andreas was regarded as one of the leading landscape painters of the 19th century.

Andreas Schelfhout was, among others, the teacher of Johan Jongkind, Jan Willem van Borselen and his son-in-law Wijnand Nuijen.

A masterpiece by Andreas Schelfhout on your wall?

Would you like to have one of Andreas Schelfhout's masterpieces on your wall? Take a look at his paintings and choose your favourite in the desired size.