Read about the life and work of Anton Mauve - Muurmeesters 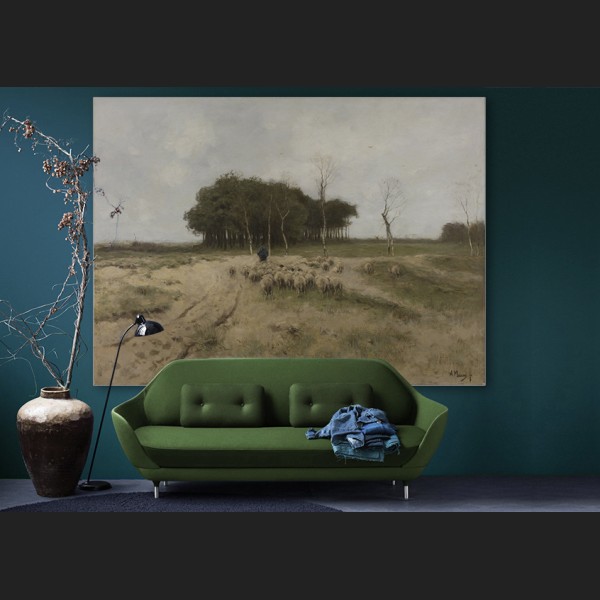 The life of Anton Mauve

When Anton was 1 year old, the family moved to Haarlem where he grew up and his interest in becoming a painter was awakened. Anton was allowed to follow this training but first he had to get his diploma to teach drawing so that he could always earn his living.

Anton married Ariette Jeanette Carbentus (1856-1894), she was a cousin of Vincent van Gogh.

Anton died suddenly in Arnhem of an aneurysm.

The work of Anton Mauve

In 1854 to 1857, Anton was apprenticed to Pieter Frederik van Os and in 1858 to Wouterus Verschuur. He painted in the style of the Hague School.

Anton was the founder of the Hollandsche Teekenmaatschappij and a member of Kunst Zij Ons Doel in Haarlem.

Many of his paintings come from the surroundings of Laren, where Anton was also a founder member of the Laren School. Art connoisseurs also call this region, instead of 't Gooi, "The land of Mauve".

In 1887 Anton received a gold medal for his work 'The Return of the Herd'.

In 1881 Anton was the teacher of the then 28-year-old Vincent van Gogh. Anton was a great influence on Vincent's work. Vincent adopted various subjects from Anton, including 'Potato Eaters' and 'Woodcarvers'.

When Vincent received a letter in Arles informing him of Anton's death, he dedicated the painting he was working on at the time, 'The pink flowering peach tree', to Anton as a 'souvenir de Mauve'.

A masterpiece by Anton Mauve on your wall?

Do you want one of Anton Mauve's masterpieces on your wall? Take a look at his paintings and choose your favourite in the desired size.