Read about the life and work of Claude Monet - Wall masters 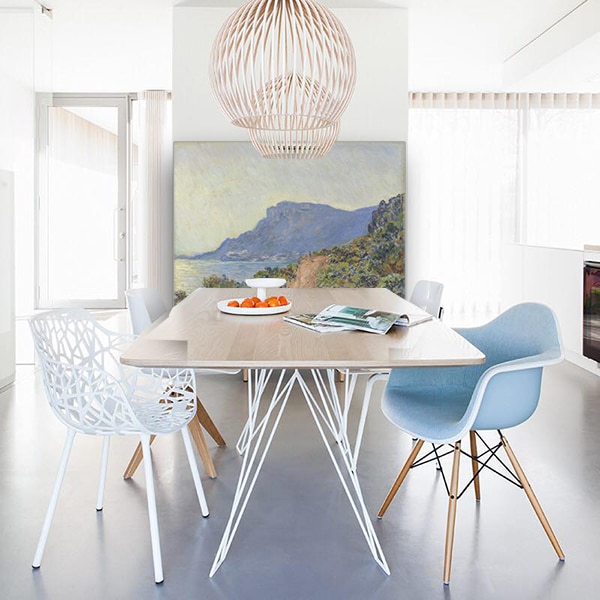 The life and work of Claude Monet

Claude was born on 14 November 1840 as the second son of Claude Adolphe Monet (grocer) and Louis Justine Aubree, at 45 Rue Lafitte in Paris. His full name is Oscar - Claude Monet.

At the age of 5, the family moved to Le Havre because of economic circumstances. His father came to work for his older half-sister's husband, Marie-Jeanne Gaillard Lecadre. She is very important to Claude because she stimulates Claude when it appears that Claude likes to draw. At first, his drawings are caricatures of wealthy people and Claude sells them. His drawings appear in the newspapers and are seen by Eugene Boudin, a painter of the sea and landscapes. Boudin takes Claude under his wing and makes him realize his talent.

In 1859, Claude Monet left for Paris to meet Boudin's teacher Constant Troyon, who also saw Claude's talent but first gave him drawing lessons and the assignment to draw paintings in the Louvre. Claude studied at the Academie Suisse where Claude made lifelong friends with Manet, Pissarro, Sisly and Degas. Claude receives painting lessons from Charles Gleyre.

When Claude was drafted into the army in 1861 and left for Algeria for seven years, he was influenced by the beauty of the landscape. In 1862, Claude was struck by typhus and returned to Le Havre to recover. There Claude met one of the precursors of impressionism, Johan Barthold Jongkind who, as Claude himself said, "taught him to compose light".

In 1865, Claude had a relationship with Camille Doncieux and in 1867 their son Jean was born. When war broke out during their honeymoon in Trouville, they left for London and returned to France, Argenteuil, via Zaandam and Amsterdam in 1871. Michel, the second son of Claude and Camille, is born in 1879. Camille died a year later and Claude and his sons went to live with the Alice and Ernest Hoschede family. In 1883, they move with the whole family to Givency.

Besides being a painter, Claude is a passionate gardener. Claude created beautiful gardens in Argentuil and later in Givency which Claude captured in many paintings. In 1890, Claude created the first garden in a colourful mix of flowers. Here Claude could experiment with colour and light. The water garden with the Japanese bridge with wisteria, water lilies and the trees and shrubs that find their reflection on the water.

When Ernest dies in 1891, Claude marries Alice. They have a rich life because the paintings are sold well. Claude makes his paintings in series. At different times of the day, Claude captures his subjects by playing with the atmosphere and the light of the moment.

Camille died in 1911 and Claude's son Jean, who was married to Alice's daughter Blanche, also died in 1914. Blanche takes care of the elderly Claude, who suffers from an eye disease and is operated on, but eventually goes blind in June 1926 and on 5 December 1926 Claude Monet dies. Claude was buried in the Givency cemetery.

Claude's possessions were passed on to his son Michel. He in turn donated the house, the garden and the water lily pond to the Academy of Fine Arts in 1966. In 1980, all this was opened to the public and can still be seen.

Claude Monet is one of the founders of Impressionism.

A Claude Monet masterpiece on your wall?

Do you want one of Claude Monet's masterpieces on your wall? Check out his paintings and choose your favourite in the desired size.