Read about the life and work of Jan Havicksz Steen - Muurmeesters 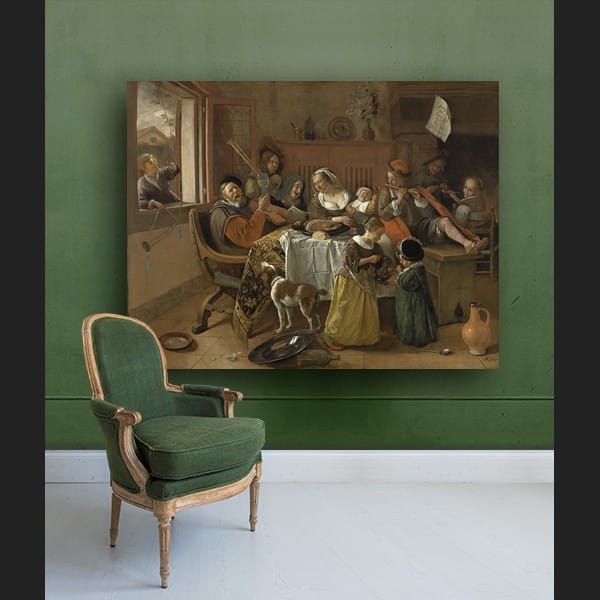 The life of Jan

Jan Steen was the son of Elisabeth and Havick Steen, a merchant in grain and brewer, and the eldest of eight children. Like his famous contemporary Rembrandt van Rijn, he attended the Latin school in Leiden and enrolled at Leiden University in 1646.

In Utrecht, he was taught by Nicolaus Knüpfer, a German painter, whose influences can be seen in his use of composition and colour. Adriaen van Ostade from Haarlem was also a source of inspiration for the painter Jan Steen. Whether Jan Steen was also his pupil is not clear.

In 1648, Jan Steen joined the artists' guild St. Luke in Leiden, where he worked with Gabriel Metsu. In 1649, Jan Steen moved in with landscape painter Jan van Goyen in The Hague, with whom he worked for five years and whose daughter Margriet he married.

Between 1660 and 1670, Jan Steen lived in Haarlem, which is considered to be his most productive period. In 1671, Steen was elected head of the artists' guild in Leiden, to which he moved back to live in the house inherited from his parents.

After the death of his wife Margriet, he remarried on 22 April 1673 with Maria van Egmond with whom he had two children. Jan Steen died in 1679 and was buried in the family grave in the Pieterskerk Leiden.

The work of Steen

Do you want an impressive masterpiece of Jan Steen on your wall? Take a look at his paintings and choose your favourite in the desired size