Read about the life and work of Thérèse Schwartze - Wall masters 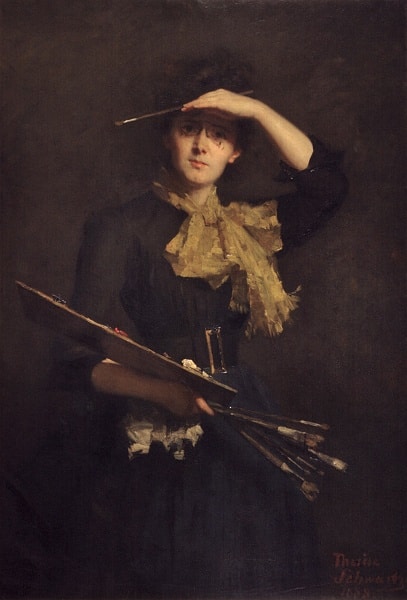 The life of Thérèse

Thérèse was born on 20 December 1851 in Amsterdam and is the daughter of Johann Georg Schwartze, painter, and Elise Hermann. Both parents have German ancestors. Georg was born in the Netherlands and grew up in America and Elise in Germany.

Thérèse is the third daughter in a family of five. She was trained as a painter by her father and, at the age of 15, already received commissions to paint wealthy Amsterdam families. When her father dies in 1874, Thérèse takes over the studio and becomes the family's breadwinner. By then they are living at Prinsengracht 1091 in Amsterdam.

The work of Thérèse Schwartze

Thérèse went on a study trip to Munich where she was recommended by Franz von Lenbach to use photographs to help her paint her portraits. After Munich, Thérèse left for Paris where she met the painters Leon Bonnat and Jean Jaques Henner. She admires them for their realistic paintings. In 1889 Thérèse receives a gold medal for her submitted self-portrait at the International Exhibition in Paris. It is a self-portrait in oil on which Thérèse can be seen at work.

Thérèse became well-known and even produced portraits of the royal family, which brought her even more commissions. In 1896, Thérèse was the first woman to be knighted in the Order of Orange-Nassau.

Thérèse achieved her success by painting with pastel chalk, which she put on the canvas with a quick, clear stroke. Most of her work (more than 1000) consists of portraits, but Thérèse also painted genre pieces, scenes from real life. Thérèse exhibits not only in Europe but also in America.

After the death of his wife, Thérèse Schwartze married her good friend Anton van Duyl on 30 August 1906. Anton was chief editor of the Algemeen Handelsblad. Not long after his death in July 1918, Thérèse dies of grief and weak health on 23 December 1918. The grave monument was designed by her sister Georgine and shows Thérèse lying in bed. Thérèse was buried on Zorgvliet and later transferred to the Nieuwe Ooster Cemetery in Amsterdam.

A masterpiece by Thérèse Schwartze on your wall?

Do you want an impressive masterpiece by Thérèse Schwartze on your wall? View her painting and choose your desired size.