Isabella Clara Eugenia of Habsburg by Frans Pourbus Atelier on your wall? - Muurmeesters 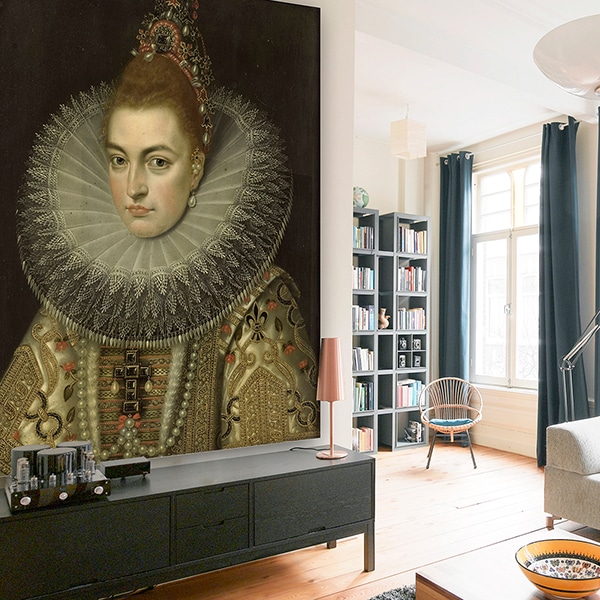 The portrait of Isabella commissioned by Isabelle Clara Eugenia ( 1566 - 1633). The portrait shows a static, distant woman without any emotion, in all her splendour. This is how she wanted to be portrayed.

Isabella was born in Segovia, Spain, on 12 August 1566. Her parents were Philip II and his third wife Elisabeth of Valois.

In 1593, Isabella was declared successor to the French throne by her father because Henry IV, a Protestant, was threatening to come to power.

This also happened because Henry converted to the Catholic faith.

Shortly before the death of her father, Philip II, she was married to Albrecht of Austria, her first cousin. On 18 April 1599, the marriage was arranged in Valencia and Isabella and Albrecht left for Brussels. They have 3 children who die in infancy.

After the death of Albrecht in 1621, Isabella wanted to return to Spain to join the monastery of Monasterio de las Descalzas Reales. However, this was not allowed and consequently Isabella remained in Brussels as Regent. Isabella spent her last years in a convent in Tervuren after she joined the Order of the Poor Clares.

Also from Isabella's husband Albert of Austria is a portrait made by Frans Pourbus II.

Read more about the life and work of Frans Pourbus II on his painter page.