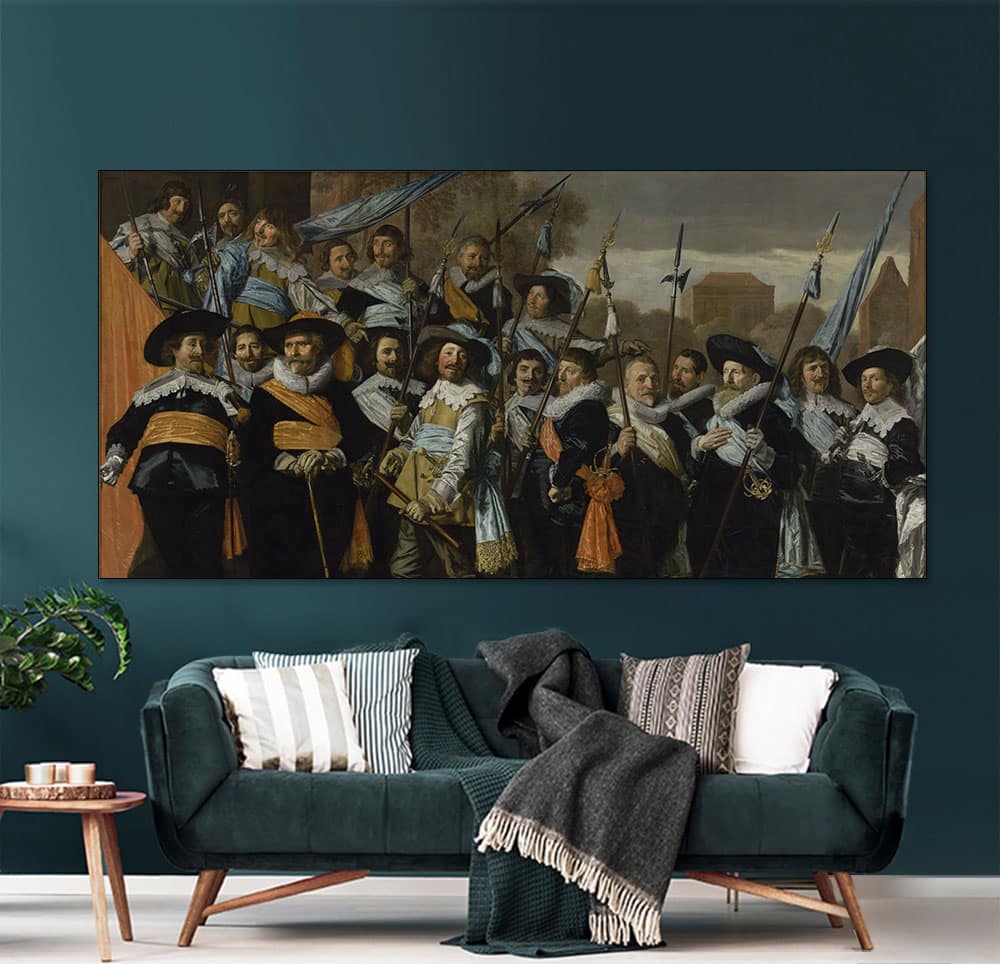 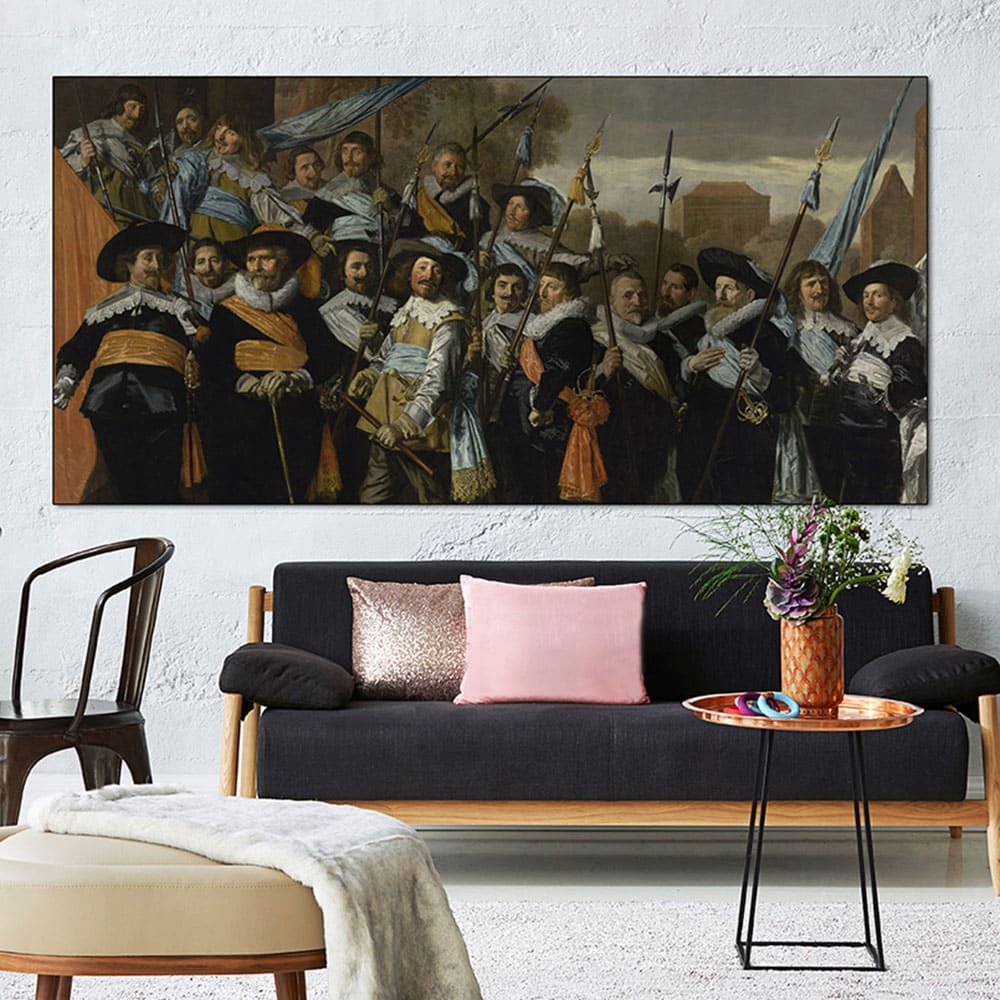 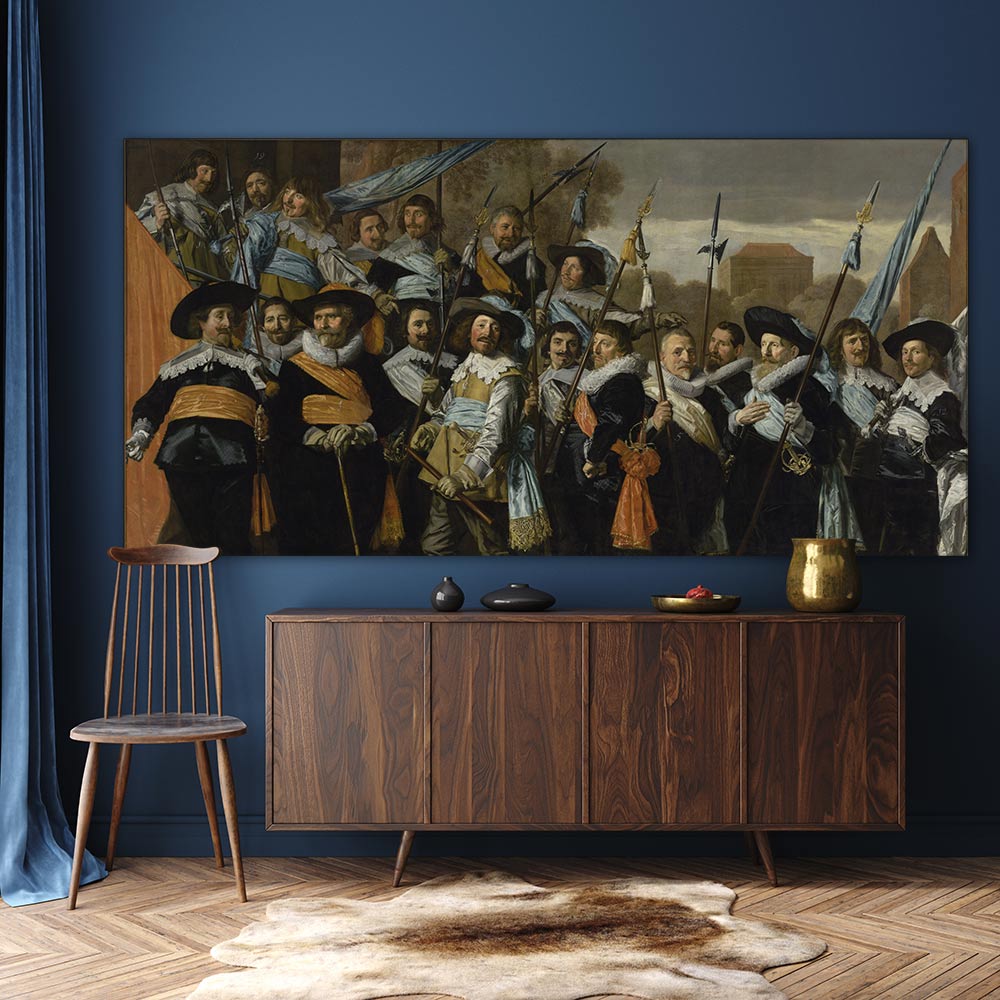 OFFICERS AND NON-COMMISSIONED OFFICERS OF THE SAINT-JONGE MILITIA

This militia piece is the last one Frans Hals painted, in 1639. The officers and sergeants are ready to march. More archers arrive from above to join the group below. The men are led by the colonel, brewer Johan Claesz Loo (left, no. 1). He has been depicted by Hals in an earlier civic guard painting. Next to him, wearing a chamois-leather waistcoat and a blue sash, is brewer Michiel de Wael, who also appears on an earlier civic guard painting by Hals. The sash is in the colour of the "rot" (section/brigade). A militia consisted of three brigades with flag bearers, orange, white or blue.

The members of the militia usually came from wealthy prominent families and often they were related to each other. They had to pay to get their portrait on the painting, so some skipped.

Frans Hals himself in the painting?

Frans Hals is also said to have depicted himself on this militia piece! He was a member of the Saint George militia, but had no special rank. He therefore placed himself as the only 'ordinary' archer in the group. The second figure from top left is recognised as Frans Hals.

Frans Hals is also known as 'the master of the loose brushstroke'. He distinguished himself from his contemporaries by a remarkably loose brushstroke (the way brushstrokes are visible on the canvas). From close up, the individual brushstrokes are always clearly distinguishable. Seen from some distance, the overall picture emerges. Look, for example, at the large knots in the sash of the figures in the foreground: from close up, this is more like an abstract work of art, but seen from a distance it is a knotted piece of fabric.

Frans Hals is famous for his 'schutterstukken': life-size group portraits of members of the militia. He painted no fewer than six: five in Haarlem, one in Amsterdam. The genre was typical of the Netherlands in the sixteenth and seventeenth centuries. By far the best known civic guard painting is 'The Night Watch', by Rembrandt van Rijn.

Gunmen were responsible for order and peace in the city. Every adult male citizen was conscripted. Because marksmen had to pay for their own uniform and armour, they were mainly from the upper class of society. Officers alternated their functions in the militia with those of the city council.

Around 1740, more than a century after Hals had completed his militia paintings, each figure was painted with a number that corresponded to the name of the militia on the corresponding name plates.

General Information on Frans Hals' as 'Master of the Loose Touch

Hals painted his portraits with a 'loose touch': quick brushstrokes in which you can still see the movement of the brush. From some distance, you can see the overall picture. With this style, Hals differed from many of his contemporaries, most of whom were much more refined. In the eighteenth century, Hals's manner of painting was considered too rough and too sloppy. A century later, however, painters such as Van Gogh and Manet hailed him as a modern precursor because of his lively style and virtuoso brushwork.

This masterpiece by Frans is on display at the Frans Hals Museum location Hof in Haarlem.

OFFICERS AND NON-COMMISSIONED OFFICERS OF THE FRENCH GENDARMERIE ON YOUR WALL?

Women by the sea
JAN TOOROP