Portrait of King William II by Jan Adam Kruseman on your wall? - Muurmeesters 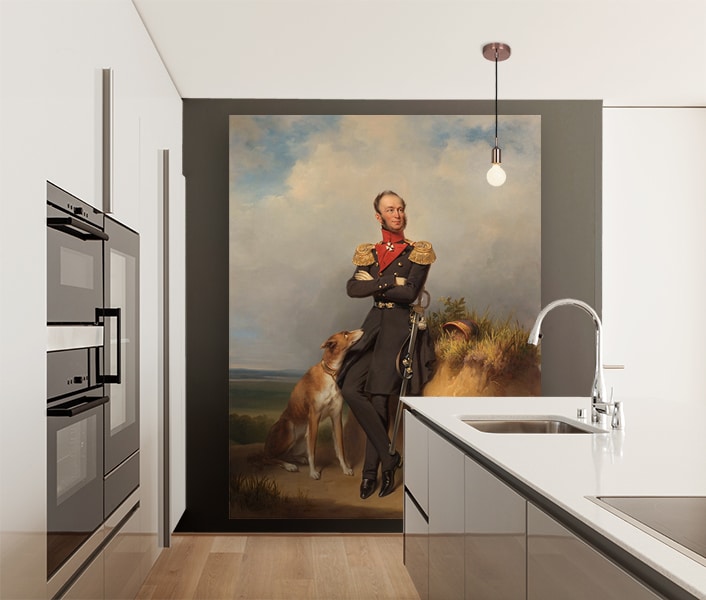 Masterpiece Portrait of William II, King of the Netherlands by Jan Adam Kruseman on your wall

Do you want an impressive masterpiece by Jan Adam Kruseman on your wall? View his paintings and choose your favourite painting in the desired size.

THE PAINTING PORTRAIT OF WILLIAM II, KING OF THE NETHERLANDS - 1839

This painting is an informal portrait of King William II in military uniform, leaning against a dune with a hunting dog beside him.

Willem II, nicknamed Guillot, was born in The Hague on 06 December 1792. His parents were the later King William I and Wilhelmina of Prussia. Willem II had another brother, Frederik, and two sisters, Paulina and Marianne.

William II was briefly engaged to the British Crown Princess Charlotte Augusta. She broke off the engagement to marry the future King of Belgium, Leopold I. On 21 February 1816, William II married Anna Paulowna, daughter of Tsar Paul I of Russia, and together they had 5 children. From 07 October 1840 until his death on 17 March 1849 in Tilburg, William II was King of the Netherlands, Grand Duke of Luxembourg and Duke of Limburg.

Read more about the life and work of Jan Adam Kruseman on his painting page.