Saint Luke painting the Madonna on your wall? - Wall masters 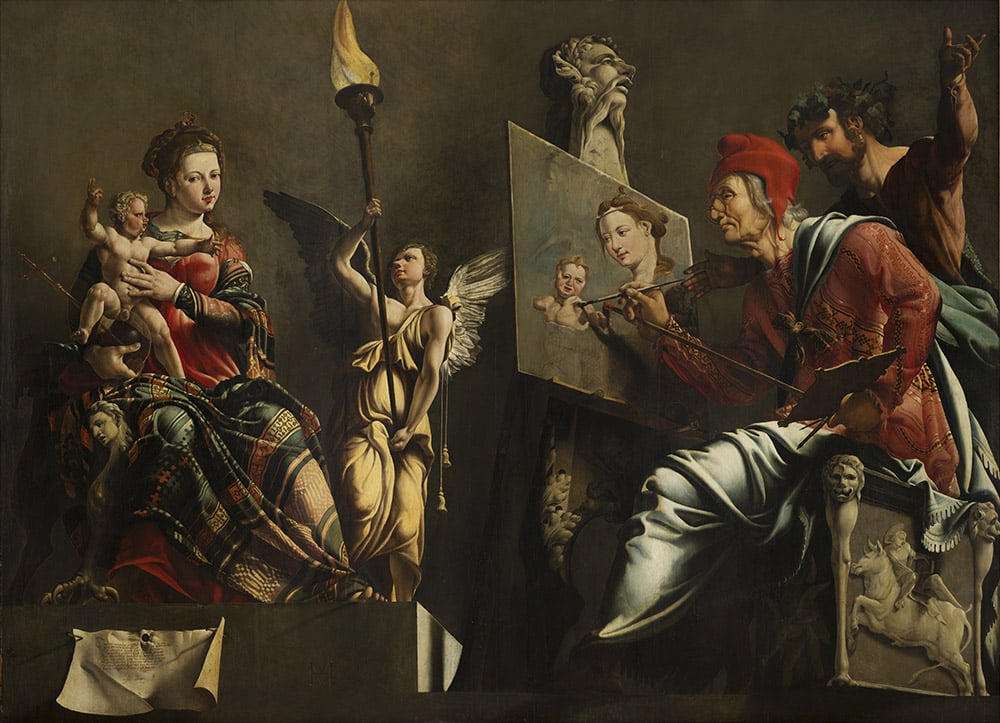 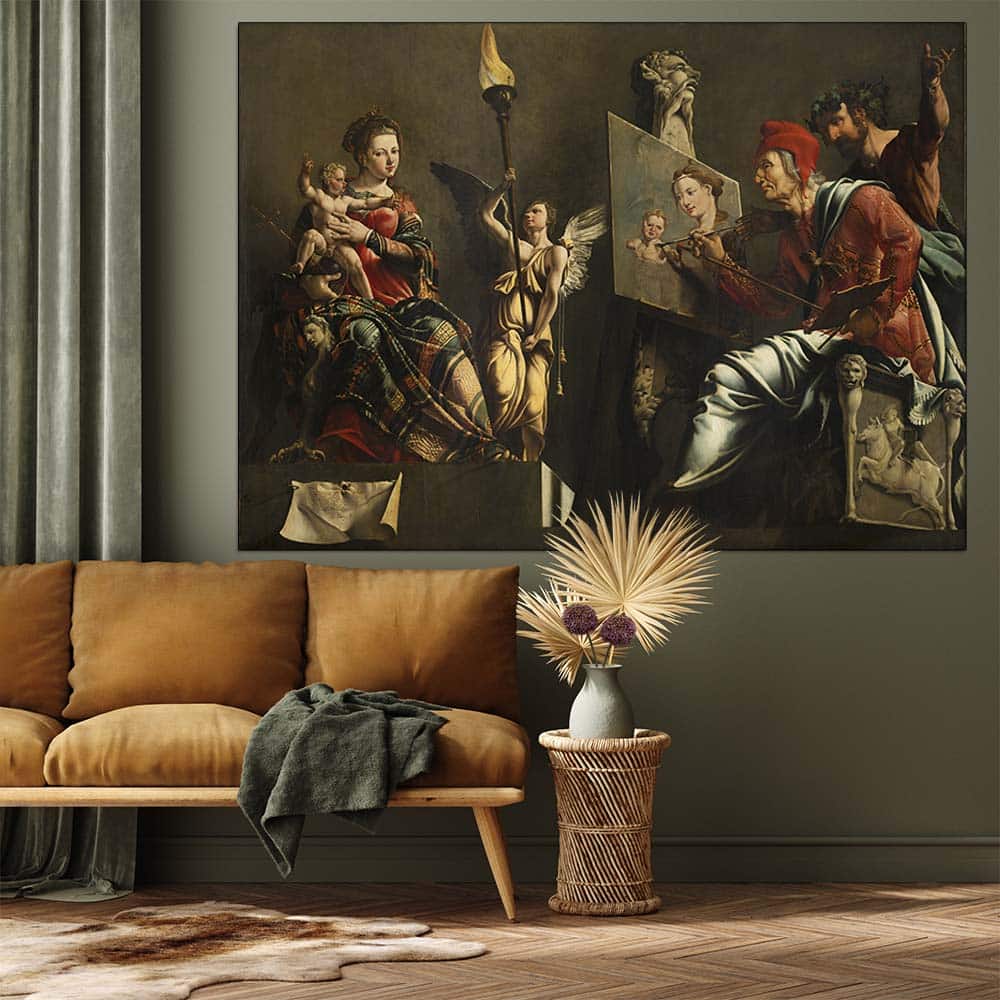 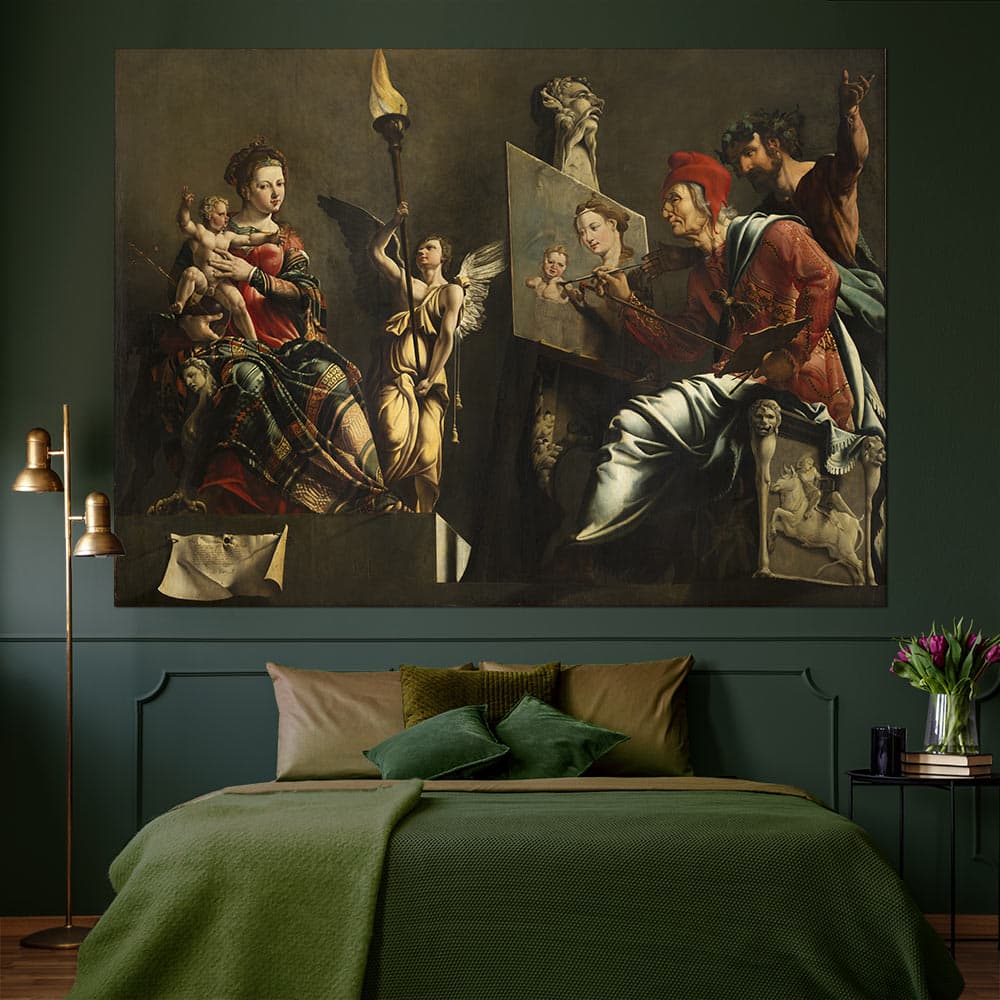 According to legend, the evangelist Luke made a portrait of Mary and the Christ Child. For this reason, Lucas became the patron saint of the Lucas guilds, the professional associations of artists. Maarten Van Heemskerck made this painting as a gift for the Haarlem Lucas guild, as is evident from the note at the bottom left:

" In memory is this token given / of Mertin Heemskerck who has given. / In honour of Saint Lucia he has done it, / our common people he has also thought of / we may thank him day by night / of his generous gift that is present here / So we want to pray with all our power / That God's grace will be around him / Anno Duysent VcXXXII ist volent 23.May".

It was intended for above the guild altar in the Grote Kerk and may originally have consisted of two parts. The painter took this into account by depicting the scene as if it were viewed from below. A baker from Haarlem posed for the figure of Lucas, and the man with the laurel wreath - the 'inspiration' - is thought to be Van Heemskerck himself. In art, inspiration is more important than craftsmanship, seems to be the message of this painting.

Maarten van Heemskerck, born on 1-6-1498 in Heemskerk as Marten Jacobsz van Veen and the son of a farmer, was a painter and draughtsman from the Northern Netherlands. He seems to have added Van Heemskerck later to name his place of birth. He worked in various places, including Haarlem, Amsterdam, Mantua and Rome.

In Haarlem, he began as a pupil of Cornelis Willemsz and later of Jan van Scorel. In 1532, Heemskerck left for Rome; this is possibly one of the last works he produced in Haarlem before his departure. In Rome, Maarten van Heemskerck focused on Classical Antiquity and the Italian Renaissance. Once back in Haarlem, he used his journey as inspiration for many religious, allegorical and mythological paintings. He was also known for his portraits and large-scale production of prints that he designed himself.

This masterpiece by Maarten van Heemskerk is part of our collection of 'Haerlemsche Meesters' and is on display in the Frans Hals Museum location Hof in Haarlem.

SAINT LUCAS PAINTS THE MADONNA BY MAARTEN VAN HEEMSKERCK ON YOUR WALL?

Do you want Maarten's impressive masterpiece on your wall? Choose your desired size!