Gunner's meal in celebration of the peace of Munster on your wall? - Muurmeesters 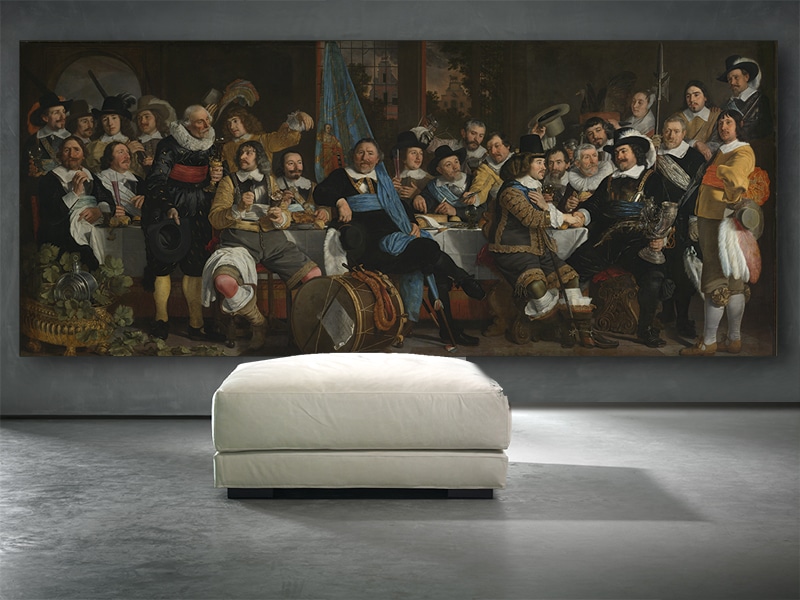 MARKSMEN'S MEAL IN CELEBRATION OF THE PEACE OF MUNSTER

The painting by the company of Captain Cornelis Jan Witsen shows the celebration of the end of the 80 Years' War on 15 May 1648. In order not to provoke the Spaniards, this was celebrated behind closed doors. It shows a symbolic reconciliation that is typical of Amsterdam politics. It shows courage and strength but, none of them really fought a battle. The distinguished stand in front and the less distinguished at the side or behind, depending on how much they were paid.

The Supper of the Archers was painted in the Voetboog- or St. Jorisdoelen in Amsterdam on the Singelgracht and was displayed in the same "Oude Sael" above the fireplace. This can also be seen through the window of the painting, which shows the view of brewery "het Lam" on the Singelgracht.

What can be seen in the painting

The painting shows Cornelis Jan Witsen shaking hands with Lieutenant Johan Oetgens van Waveren, who hands him the silver drinking horn of the St. George's Guild, the Horn of the Vree.

In the centre of the painting sits ensign Jacob Banning with the blue vandal depicting the Amsterdam maiden. In front of him is the drum with the poem by Jan Vos *.

On 25 June 2006, the work was sprayed with lighter fuel by a German art hooligan. Due to rapid action, only the varnish layer was damaged.

This masterpiece by Bartholomew has been on display at the Rijksmuseum in Amsterdam since 1808. Read more about the life and work of Van der Helst on his painter page.

* The full text of the poem by Jan Vos reads:

Belloone is disgusted by Bleeding

From the pregnant metal,

And the sword loves the sheath:

This is what the brave Wits offer

to the nobleman of Waveren

To the eternal covenant,

the hearing of the Vree.

MASTERPIECE PEACE OF MUNSTER ON YOUR WALL?

Shell fisherman on the beach
JACOB MARIS
Choose your language