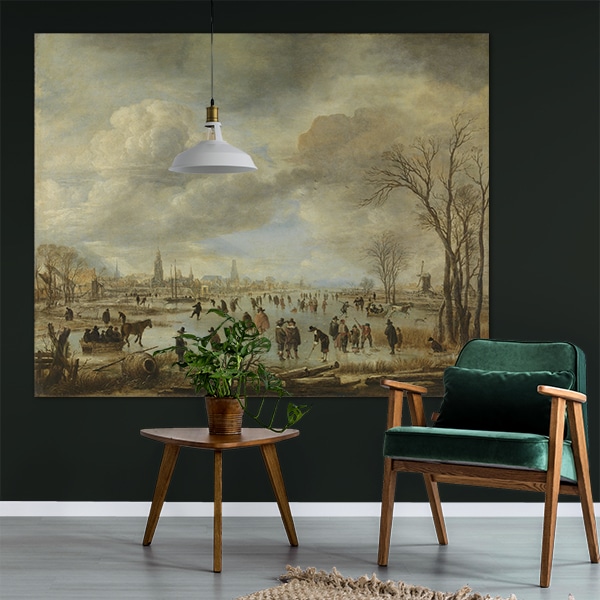 Aert was born in 1903 in Gorinchem. His parents were Aegron Aertsz van de Bosch and Aeltge Jans van Gorcum.

Aert married Lysbeth Goverts, sister of painter Camphuysen, in Amsterdam in 1629. Together they had 5 children, including Eglon. Eglon also became a painter, but made more portraits than his father Aert. Aert was a landscape painter and drawer. Eglon's son, Aert van der Neer the younger followed in his father's and grandfather's footsteps and also became a painter.

Aert did not earn enough from his paintings and, in order to obtain an income, he became the landlord of the Graeff van Hollant in the Kalverstraat in Amsterdam in 1659. In 1662, this wine tavern went bankrupt.

In his final years, Aert van der Neer painted again, but he died in poverty on 9 November 1677 in the Kerkstraat in Amsterdam.

Aert was a landscape painter who produced many paintings in the twilight/moonlight of rivers and bodies of water of his own making. He criss-crossed the landscapes between the Maas and the Rhine and so regularly visited Dordrecht, where he became friends with Aelbert Cuyp. To make Aert's paintings more lively, Aelbert painted figures and animals on them.

In 1652, Aert painted the fire of the town hall in Amsterdam, which now hangs in Berlin and Copenhagen.

Aert van der Neer left about 150 works. A large collection of them hangs in the Hermitage in St. Petersburg.

A masterpiece by Aert van der Neer on your wall?

Do you want one of Aert van der Neer's masterpieces on your wall? View his paintings and choose your favourite in the desired size.