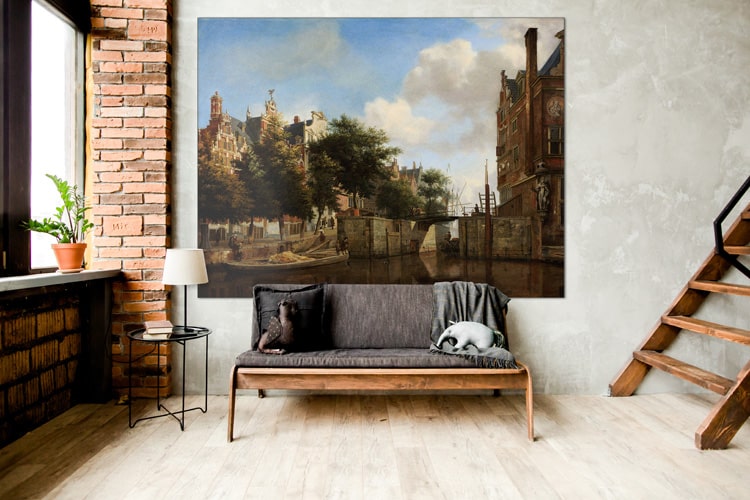 Jan van der Heyden was born on 5 March 1637 in Gorinchem. When Jan was 9 years old, he moved with his family to Amsterdam where his father registered as a grain merchant; they lived on the Dam square. Jan was apprenticed to his brother Goris as a glass painter and as an assistant in the mirror shop on the Dam.

On 26 June 1661, Jan married Sara ter Hiel from Utrecht. Like Jan, she has many relatives in Germany, where Jan regularly goes on a study trip.

His earliest work concerns coats of arms of himself and his wife. He works in great detail and makes use of earlier studies of cityscapes. Jan van der Heyden's works often consist of combinations. He has the figures in his paintings painted by Adriaen van der Velde, Eglon van der Neer or Johannes Lingelbach.

In addition to being a painter, Jan is also an inventor. Together with his brother Nicolaar he invents the street lamp, which is installed not only in Amsterdam but also in other large cities, such as Haarlem, Groningen and even Berlin. In 1670 Jan is appointed superintendent of street lanterns. Jan also improved the fire engine in 1672, after a great fire had destroyed the Amsterdam town hall. In 1682 he was appointed general fire master in Amsterdam. Van der Heyden was not entirely without wealth.

In 1679, Jan bought land at Koestraat 5 in Amsterdam where he built a house and a factory. This is where his inventions were made. Later on this was taken over by his son Jan. Jan dies on 28 March 1712 in the house on Koestraat.

A masterpiece by Jan van der Heyden on your wall?

Do you want an impressive masterpiece by Jan on your wall? View his painting and choose your favourite format.