Elegant company in a Dutch Renaissance room on your wall? - Wall masters 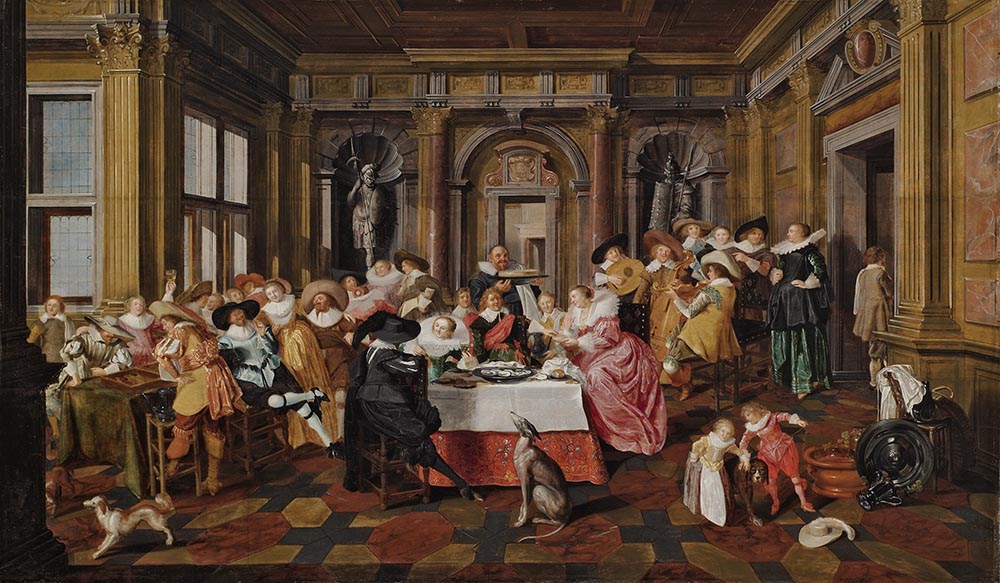 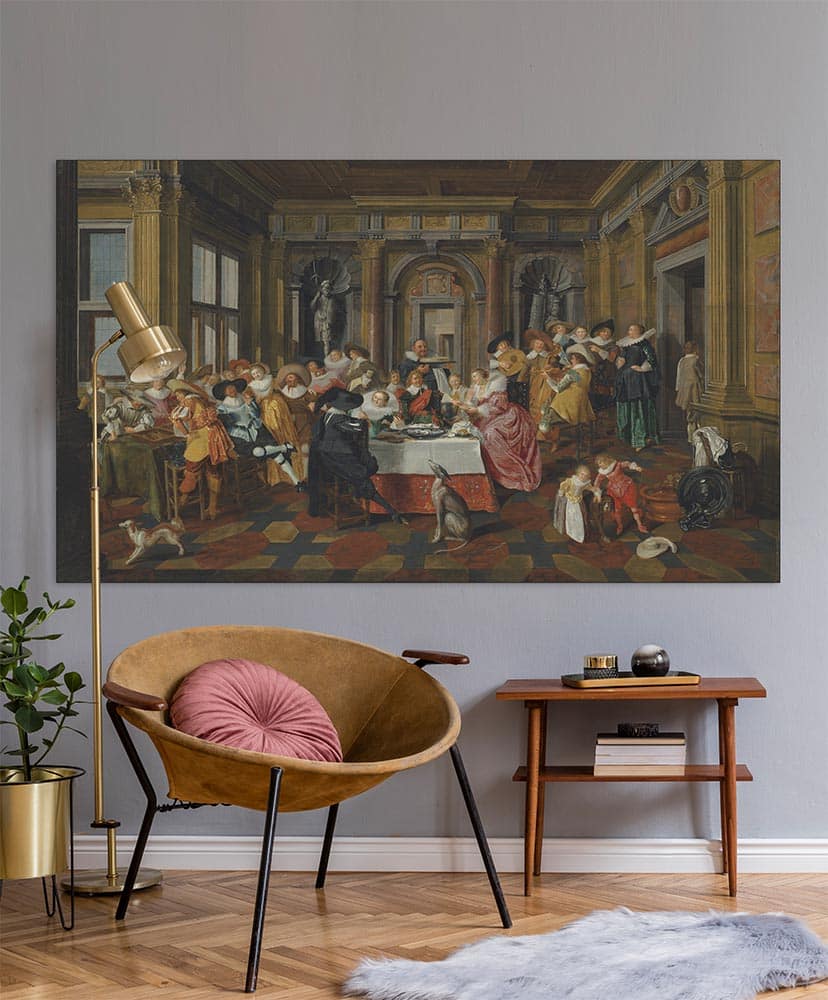 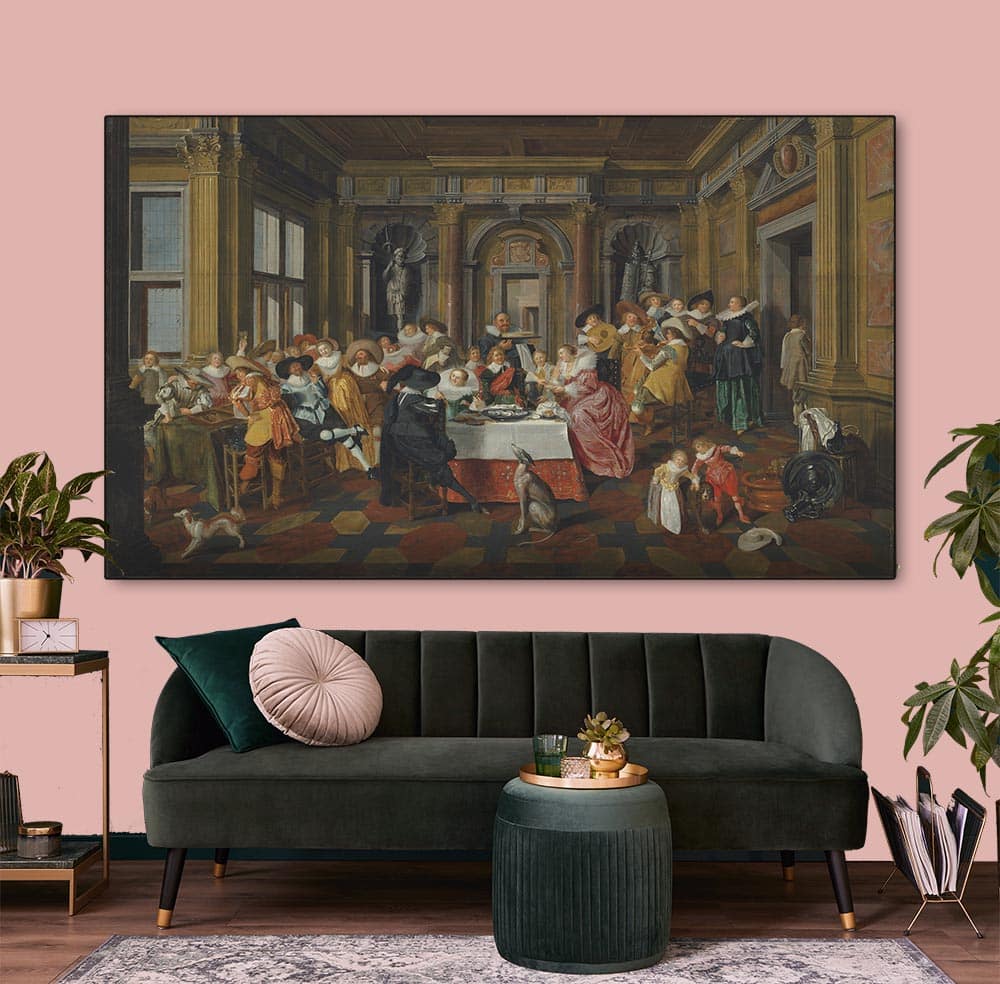 With the generous support of funds, the Frans Hals Museum has succeeded in acquiring a masterpiece for the collection of the city of Haarlem. Elegant company in a Dutch Renaissance room is a collaboration between the 17th century painters Dirck Hals and Dirck van Delen. Only five collaborations by these artists are known, none of which was in a Dutch museum until the acquisition. The acquired work is also the largest and most detailed collaboration and illustrates the special place that Haarlem occupied as a breeding ground for innovation in 17th-century Dutch painting.

The painting is a fine example of a 'merry company', a genre that was popular in Haarlem in the 1620s and 1630s. These scenes usually depicted richly dressed, fashionable young people. Dirck Hals (Haarlem 1591-1656), Frans Hals's younger brother, was one of the most important interpreters of this genre. He was a master at depicting figures, often incorporating both jokes and subtle warnings against excess or frivolity in his representations. In Elegant company in a Dutch Renaissance room, the figures are also by his hand. The architecture is painted by Dirck van Delen (Heusden 1604/5- Arnemuiden 1671), who mainly worked in Middelburg. Van Delen is known for his interior pieces with rich decorations. He left recesses in the architecture with a white background, on which Dirck Hals could insert his figures.

The Frans Hals Museum already had three other merry-makers by Dirck Hals in its collection (one on long-term loan from the RCE). With this acquisition, the museum can show that the fame of Dirck Hals already transcended the city boundaries in his own time and artists from abroad were eager to work with him. From mid-September, the painting will be displayed in the collection presentation Haarlem Heroes. Other Masters. The painting was previously on display in the Frans Hals Museum: from 1948 to 2019 it was on loan from the RCE. (Rijksdienst voor Cultureel Erfgoed). In 2019 it was returned to the heirs of Jacob Lierens (1877-1949), a Jewish businessman and art collector from Amsterdam. He sold it at auction in 1941, before his business was 'organised' by the Nazis and he and his wife were interned in Westerbork.

Ann Demeester, Director Frans Hals Museum: "Elegant company in a Dutch Renaissance room by Dirck Hals and Dirck van Delen is an extremely festive masterpiece of 17th-century Haarlem painting, graceful and elegant. We are delighted that, with the generous support of funds and private individuals, we have been able to acquire this extraordinary work of art for the collection of the Municipality of Haarlem, so that it will remain visible to the public now and for future generations."

This masterpiece by Frans is on display at the Frans Hals Museum location Hof in Haarlem.

Do you want this special masterpiece your wall? Take a look at the painting and choose your favourite size.